I got this Raspberry Pi case from eBay. There are various sellers; I paid about $9 for it. The fan hooks up to 5v and ground GPIO pins, and is intended to run continuously.

I decided I would rather that the fan was on only when necessary. Nicely enough, the Raspbian OS provides a command that reports the CPU temperature:

So only a little bit of additional hardware was necessary to enable temperature-based software control of the fan.

The BC337-25 NPN switching transistor can handle up to 500 mA of collector current and was available on eBay for $3.20 for a bag of 50 (shipping included). Typical fan current is under 200 mA. Assuming a 0.7v base-emitter voltage drop, a 3.3v GPIO output though 560 ohms results in a 4.6 mA current. With a typical transistor beta over 100, this should be plenty to control the fan, while still being safe for the GPIO pin.

I assembled the circuit on a little chip of stripboard: 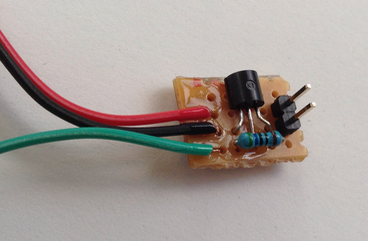 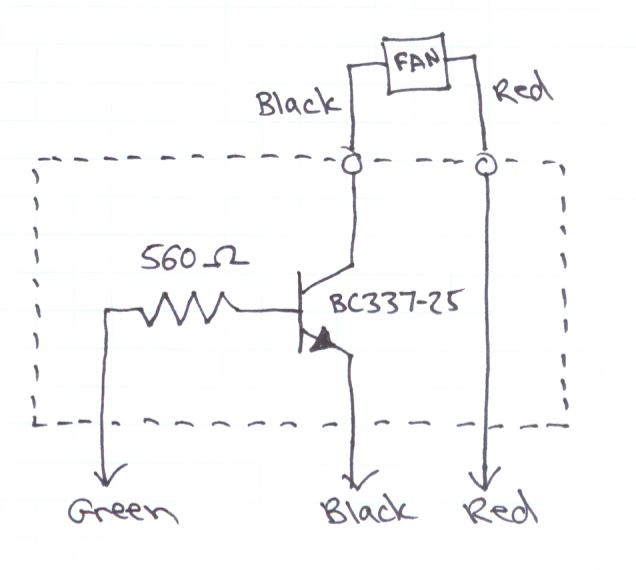 I put a little clear nail polish over the wires to hold them down onto the circuit board. I wrapped the circuit board in silicone tape and stuck it to the side of the fan with some silicone caulk. The red and black wires from the circuit board were attached to 5v and ground (pins 4 and 6 - see GPIO pinout) as before. I wasn't using BCM 17 (pin 11) for anything else, so I attached the green wire there.

I made sure that the WiringPi library was installed. I could then turn the fan on and off from the command line:

The following assumes that Raspbian Stretch is installed.

To automate the fan control, I created three shell scripts.

Make script to turn on fan

Make script to turn off fan

Make script to check temperature and call fanon or fanoff

This script turns on the fan at 40°C or higher and turns it off at 35°C or lower. (This is better than having a single theshold temperature for turning the fan on and off, since it prevents the fan from continually turning on and off if the temperature fluctuates around the threshold.)

To test the scripts, open three ssh terminals to the Raspberry Pi.

In the first terminal, run the monitoring script:

In the second terminal, watch the CPU temperature:

In the third terminal, run a program to stress the CPU (which will increase the temperature):

To have the runfan tool run automatically as daemon, I created a systemd unit file. (Note that online references to rc.local as the way to do this are now obsolete.)

in one window and

in the other. Verify that the fan turns on and off automatically at 40°C and 35°C. To disable the automatic fan service, use: