I am a fan of the Trangia alcohol camping stove. It's simple, it's quiet, it's clean, and it's bullet-proof.

For car and family camping, I use the Trangia 25 set. 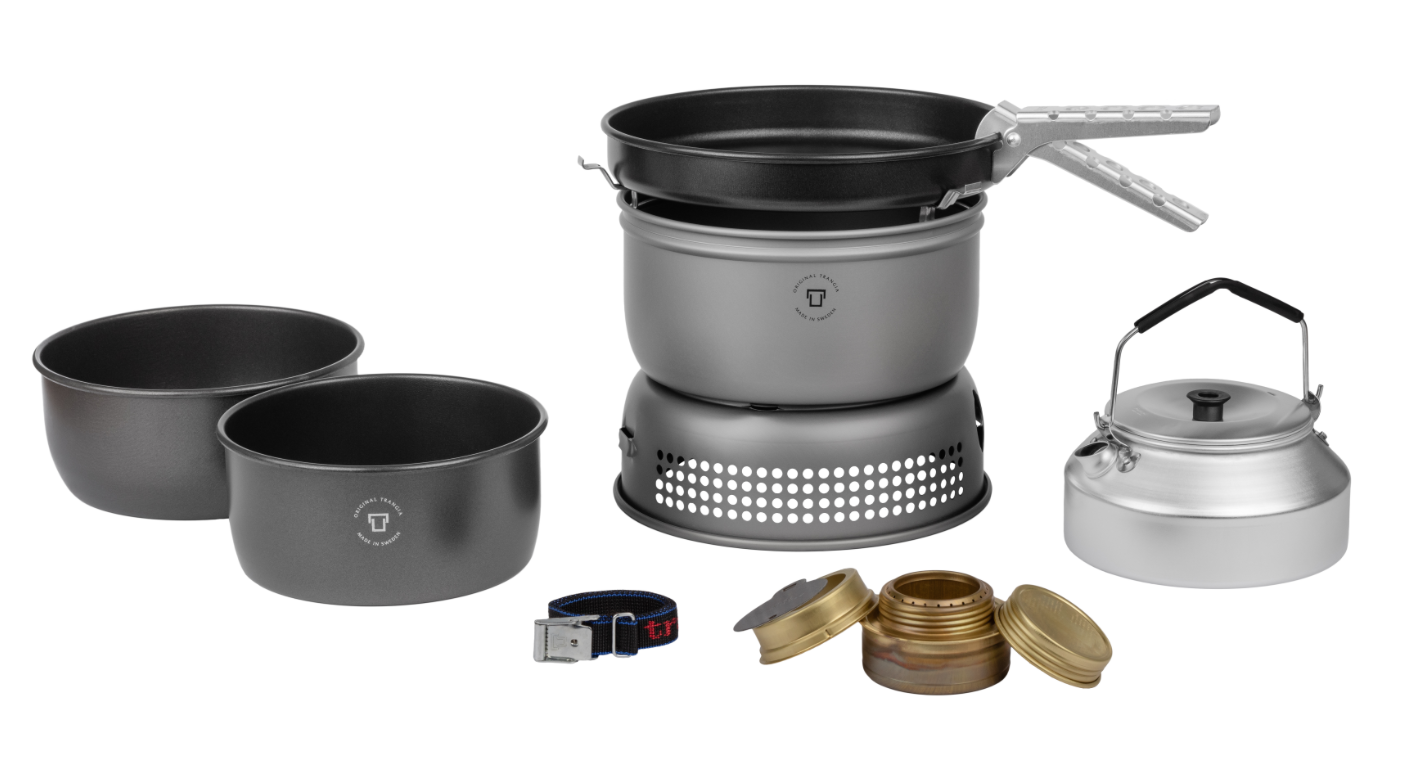 It's a great stove set, but with all the accessories it's a bit heavy for one person. For solo backpacking, I prefer the Westwind stove stand, which, alas, is no longer available. Three flat, easily-stored, pieces of aluminum hook together to form the stand. 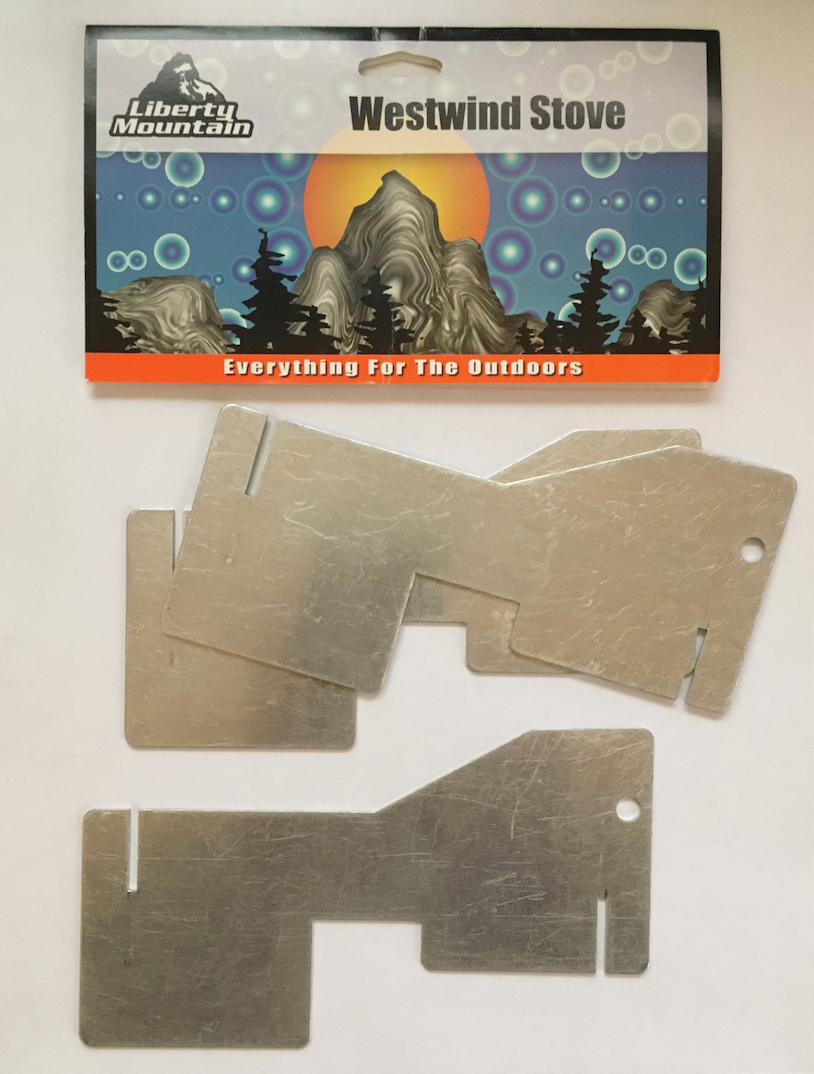 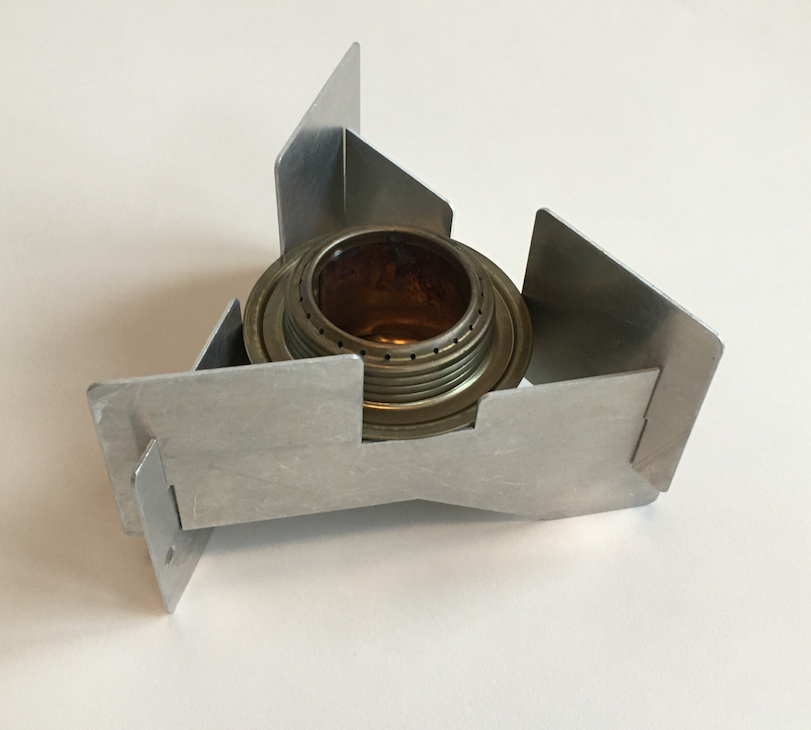 A single pot, along with a homemade windscreen made from a disposable turkey roasting pan, complete the lightweight set. 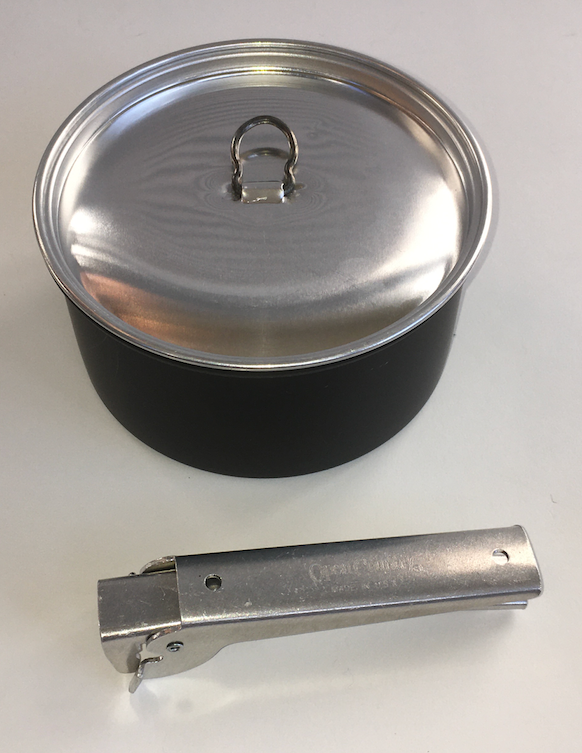 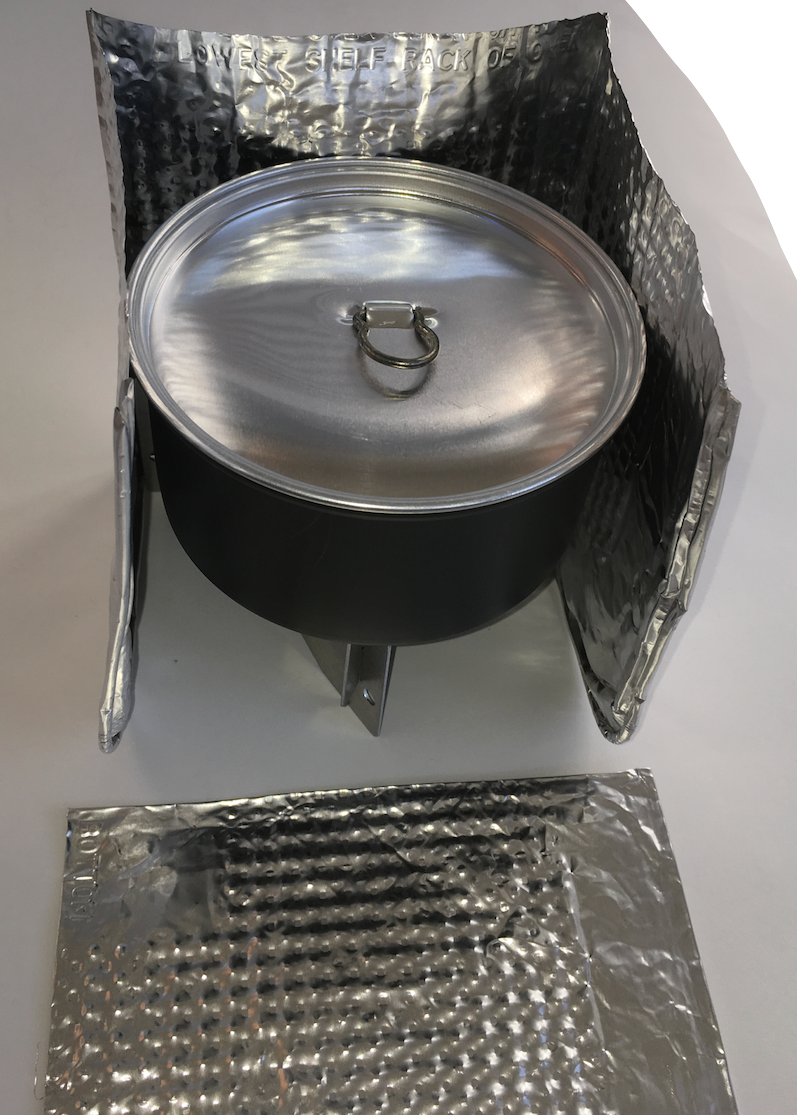 I would have preferred to use this pot, however, the TOAKS Titanium 750ml Pot. It's a tiny bit lighter, it doesn't need a separate pot lifter, and it can double as a drinking cup. Also, being made of titanium, it has significantly higher hipster cred. 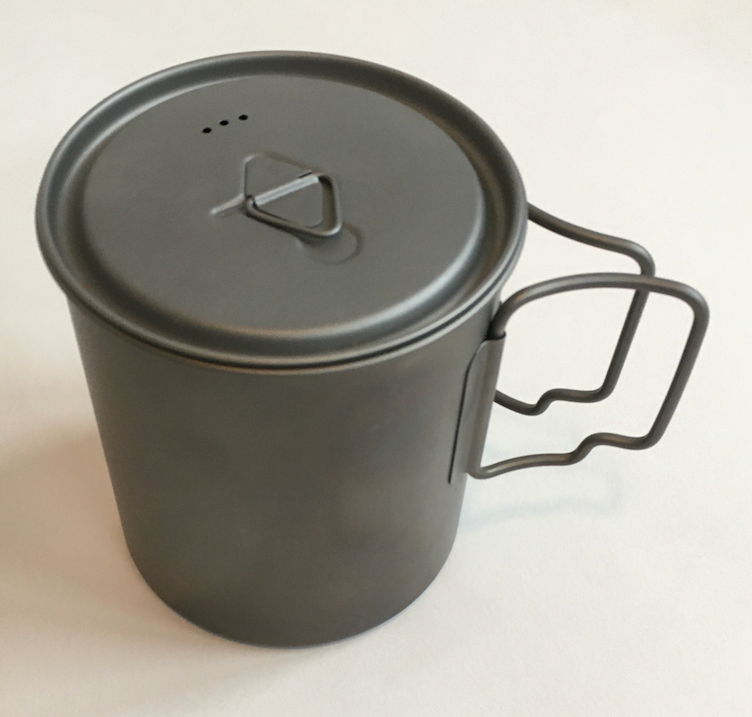 The problem is that it has a smaller diameter than the other pot, and it seemed a bit precarious when (necessarily) perched close to the edge of the pot stand. I didn't like the idea that it could tip over so easily if jostled, or if the stand was on tilted ground. 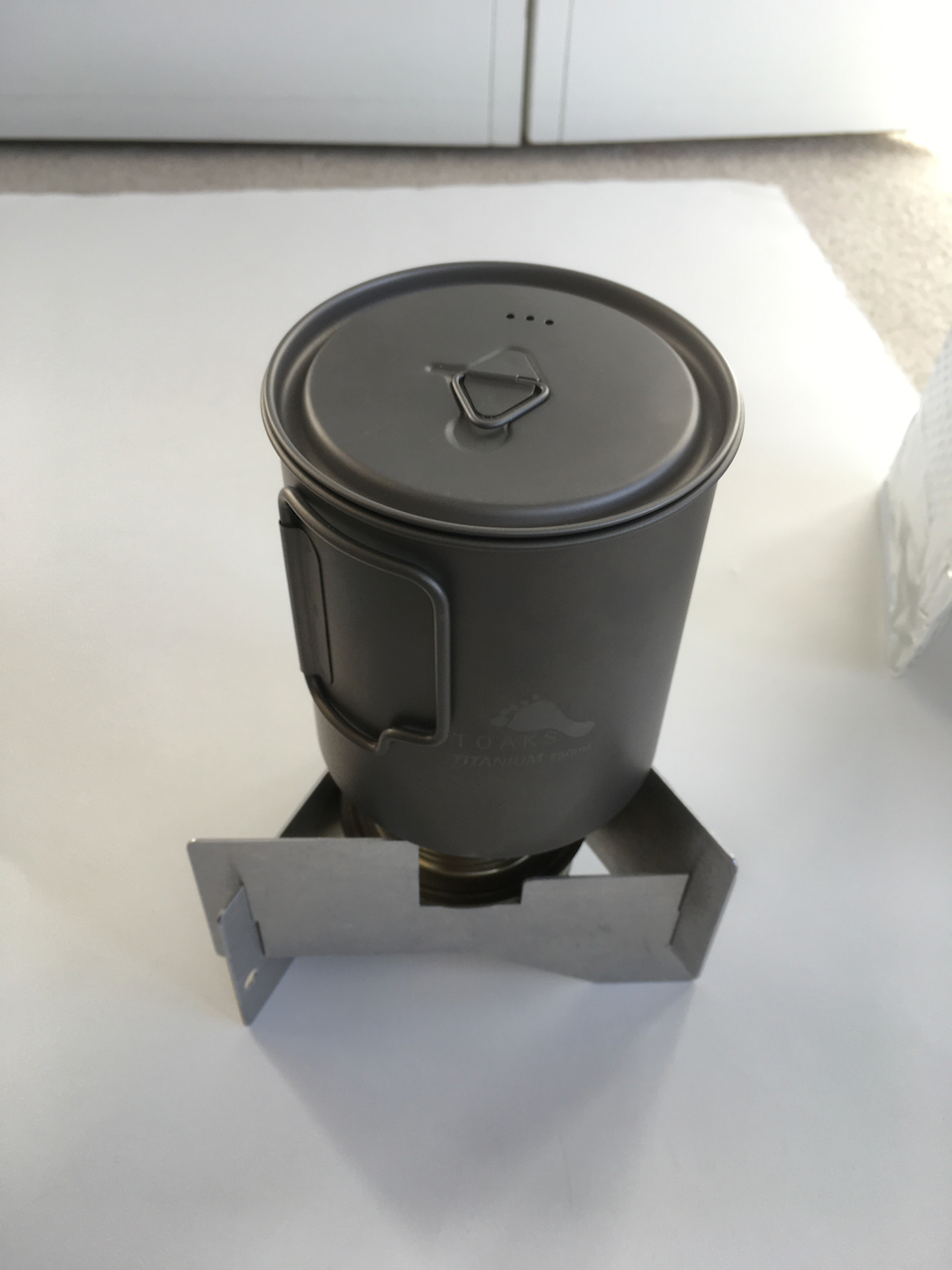 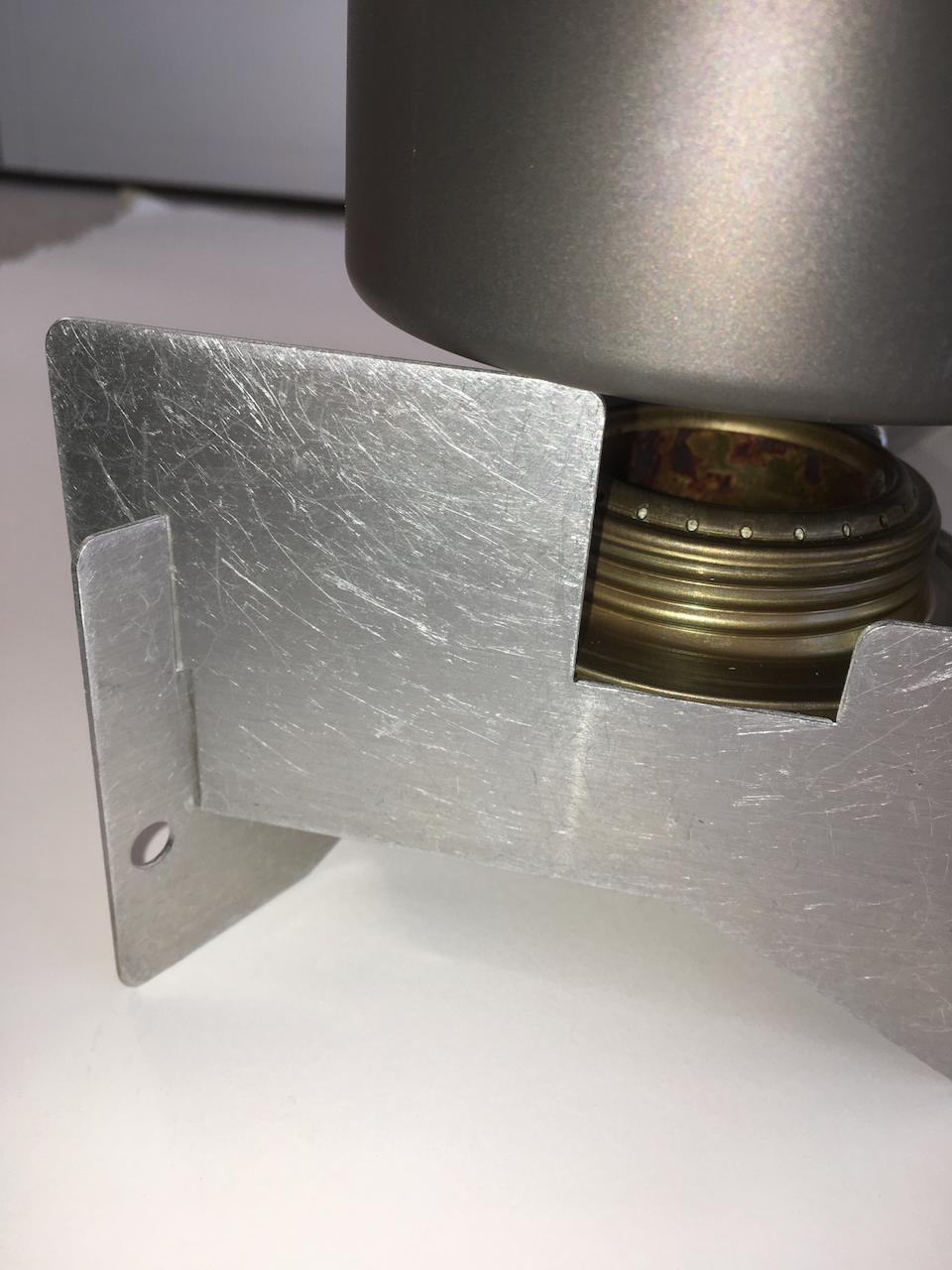 So I decided to make my own stove stand, a modified version of the Westwind stand custom-made to hold the TOAKS pot.

This would also give me a chance to adjust the distance between the top of the burner and the bottom of the pot. The Westwind stove places the pot 0.75" above the burner. The Trangia set places the pot at a height of 1.1". YouTube user ColoradoCamper did a series of experiments that found the optimum height for speed of boiling water to be 1.44", although "anything from 1.25" to 1.75" should be fine." I opted for a height of 1.3", which roughly splits the difference between the Trangia height and the experimentally-determined optimum height.

First, I measured my Westwind stove. One of these was helpful:

The Westwind stove is made out of 3/64" aluminum, with the following other dimensions: 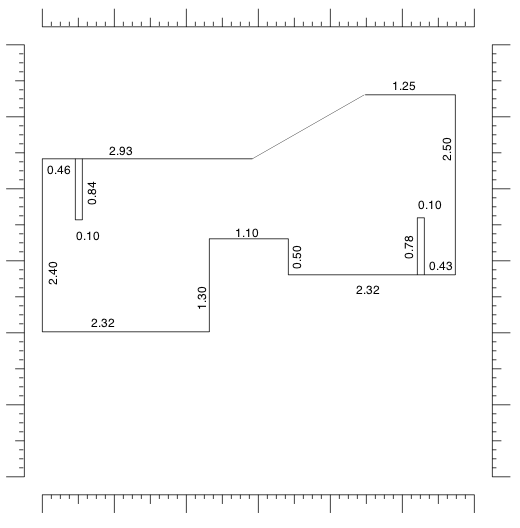 The above drawing was intended to be exactly to scale, but it was made with a simple drawing program, not one intended for precise CAD (Computer Automated Design) work, and it was printed out on my low-end laser printer, so I needed to check.

The supposedly-accurate inch markings on the four rulers were actually slightly off on the paper printout. The drawing was shrunk in the vertical direction by 0.8% and in the horizontal direction by 0.4%. To correct this as best I could, I set the PDF scale factor to 101% when printing out my templates.

Next, I drew up a modified plan that provided for side support for the TOAKS pot when sitting on the stand. 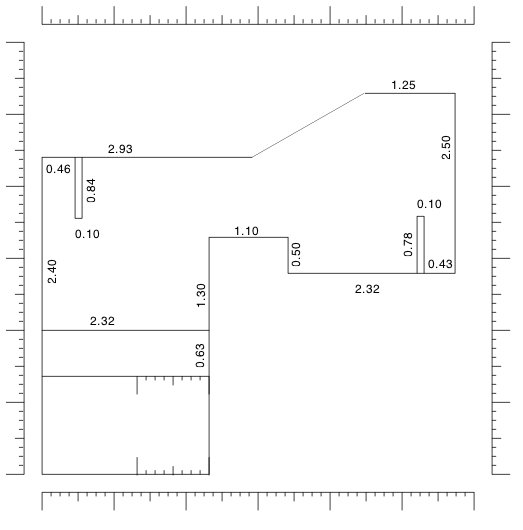 I didn't know the exact dimensions of the cut-outs for the side supports, so I glued the plans to some cardboard and experimented clipping out bits until the pot fit correctly. This also gave me chance to check the other dimensions before I started cutting metal. 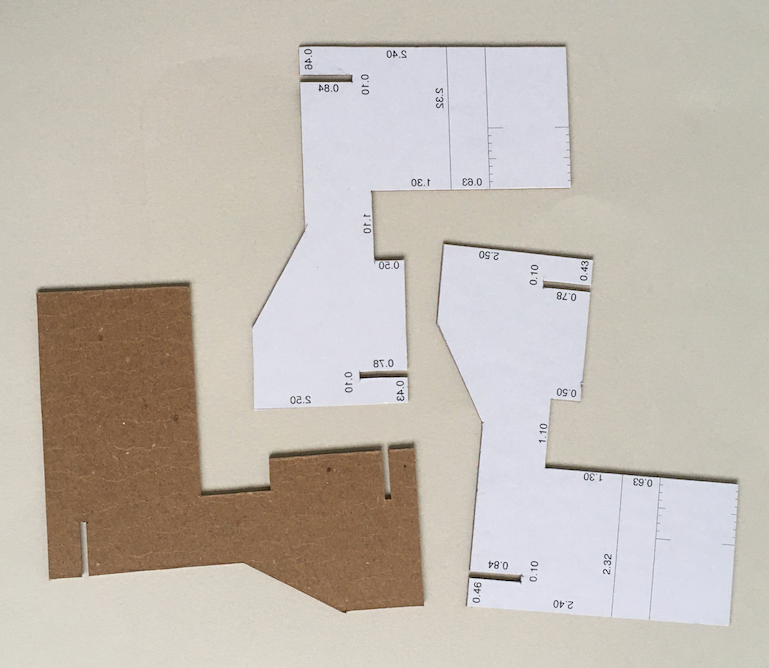 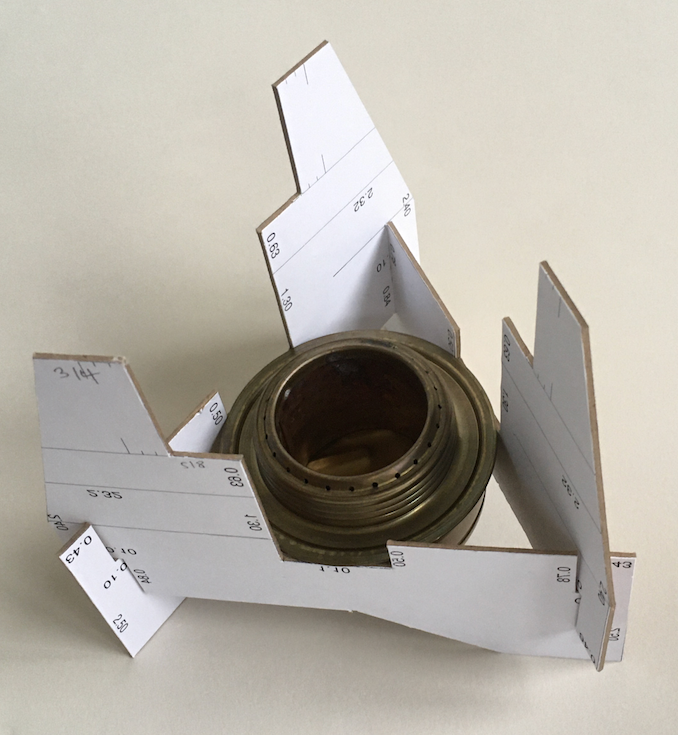 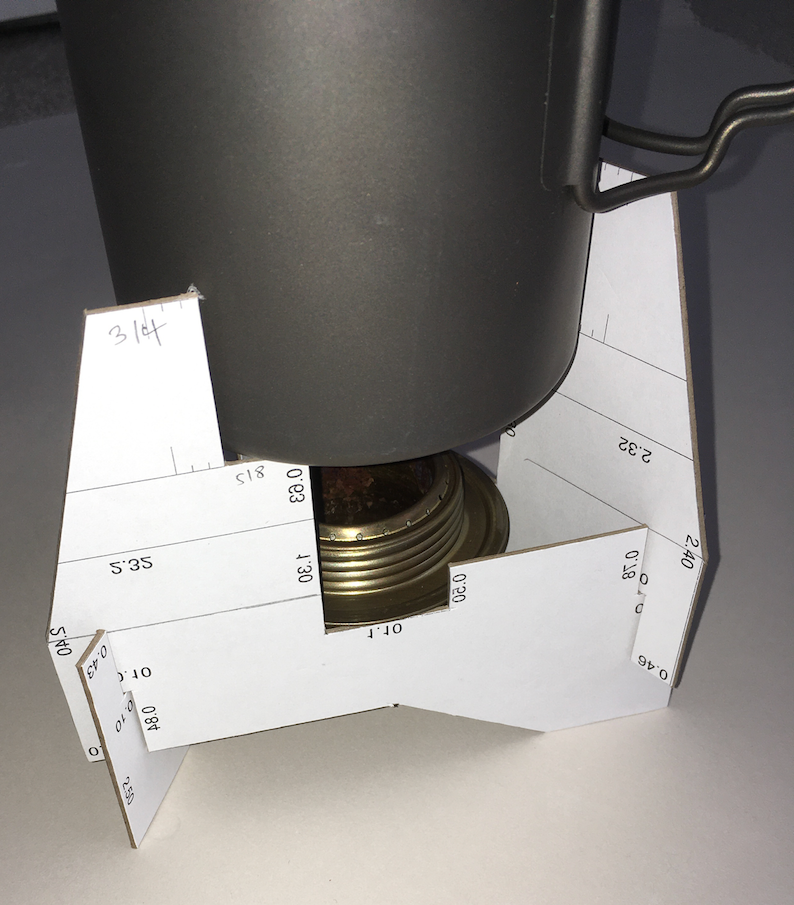 I used a snug fit for the pot with the cardboard templates, since I could always cut more metal later if the cutouts were too small. This turned out to be the case, and I had to trim another 1/4" from two of the pieces for the pot to fit in the stand easily.

This was the final plan I used for the first pass at cutting the metal sheet: 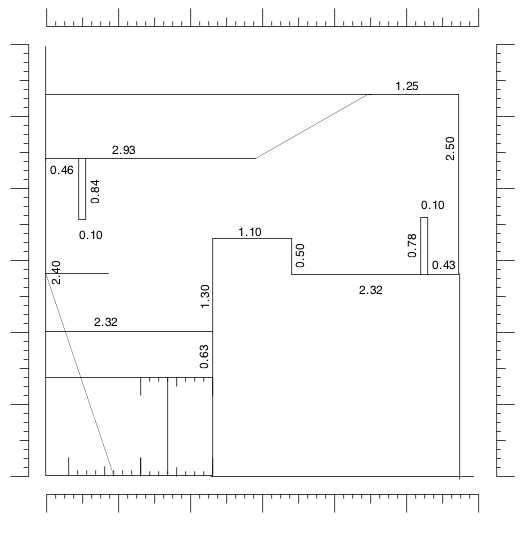 To cut the metal, I used a hacksaw with a 32 tpi blade for most of the work, and a Dremel tool with an EZ456 metal cutting wheel for the slots and for places that weren't accessible to the hacksaw. 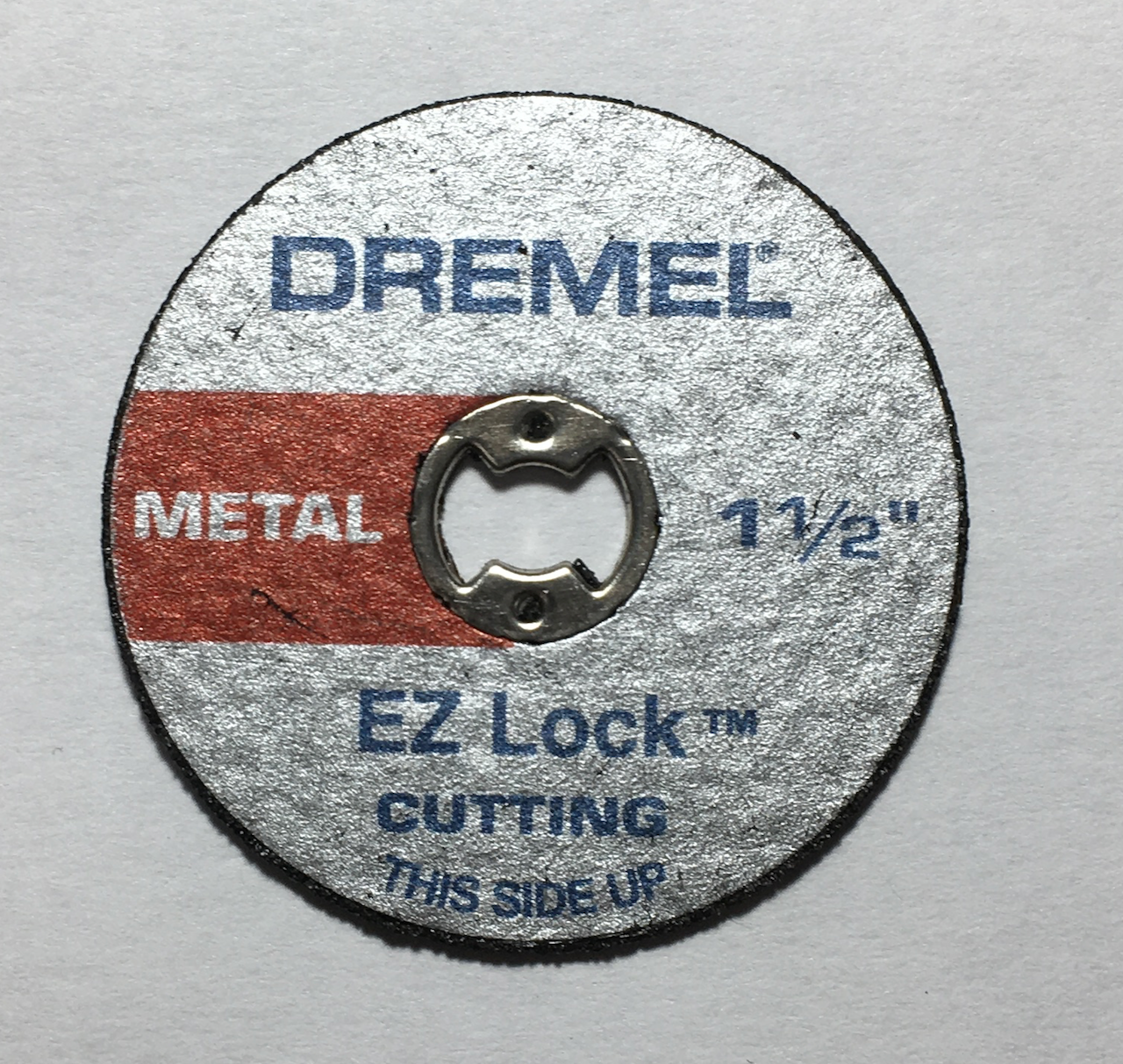 I smoothed the edges and rounded the pokey corners with an ordinary metal file. I needed to get some tiny files to clean up the slots.

In hindsight, I would have cut slightly thinner slots and filed them out as needed. This is both because the metal I used is a bit thinner that the original Westwind, and also to allow for more slop in making the cuts. The slots ended up slightly wider than optimum. 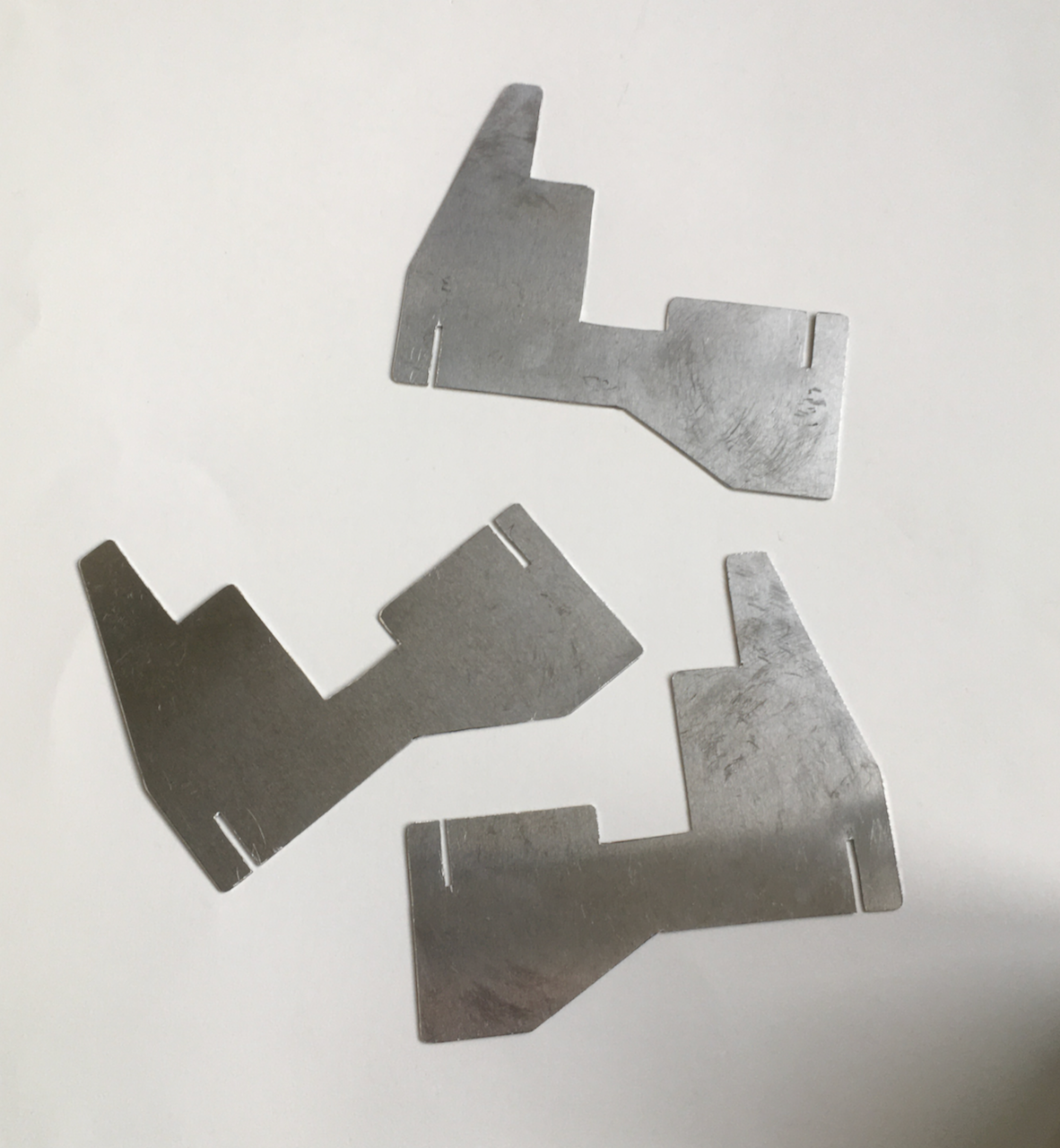 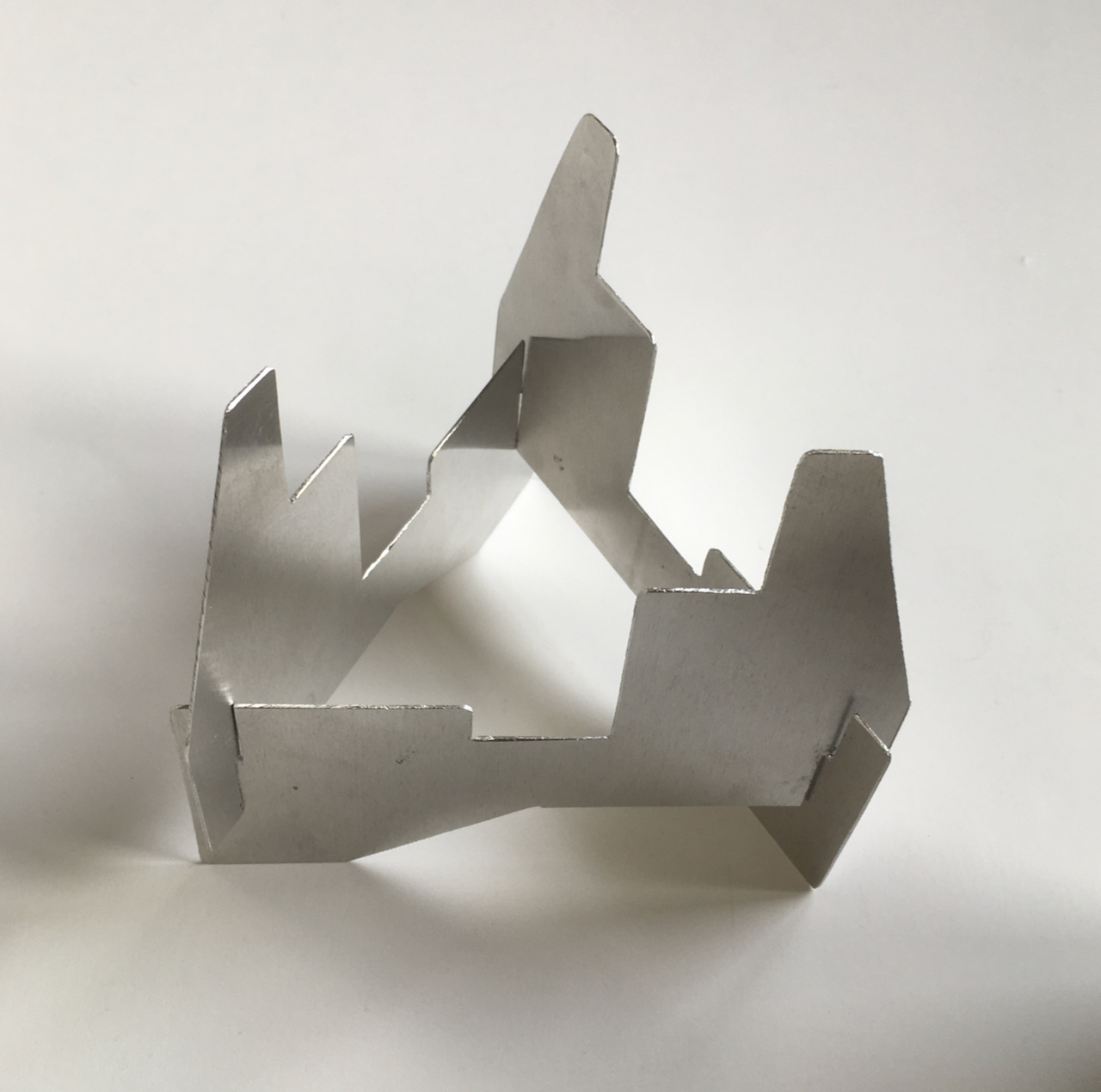 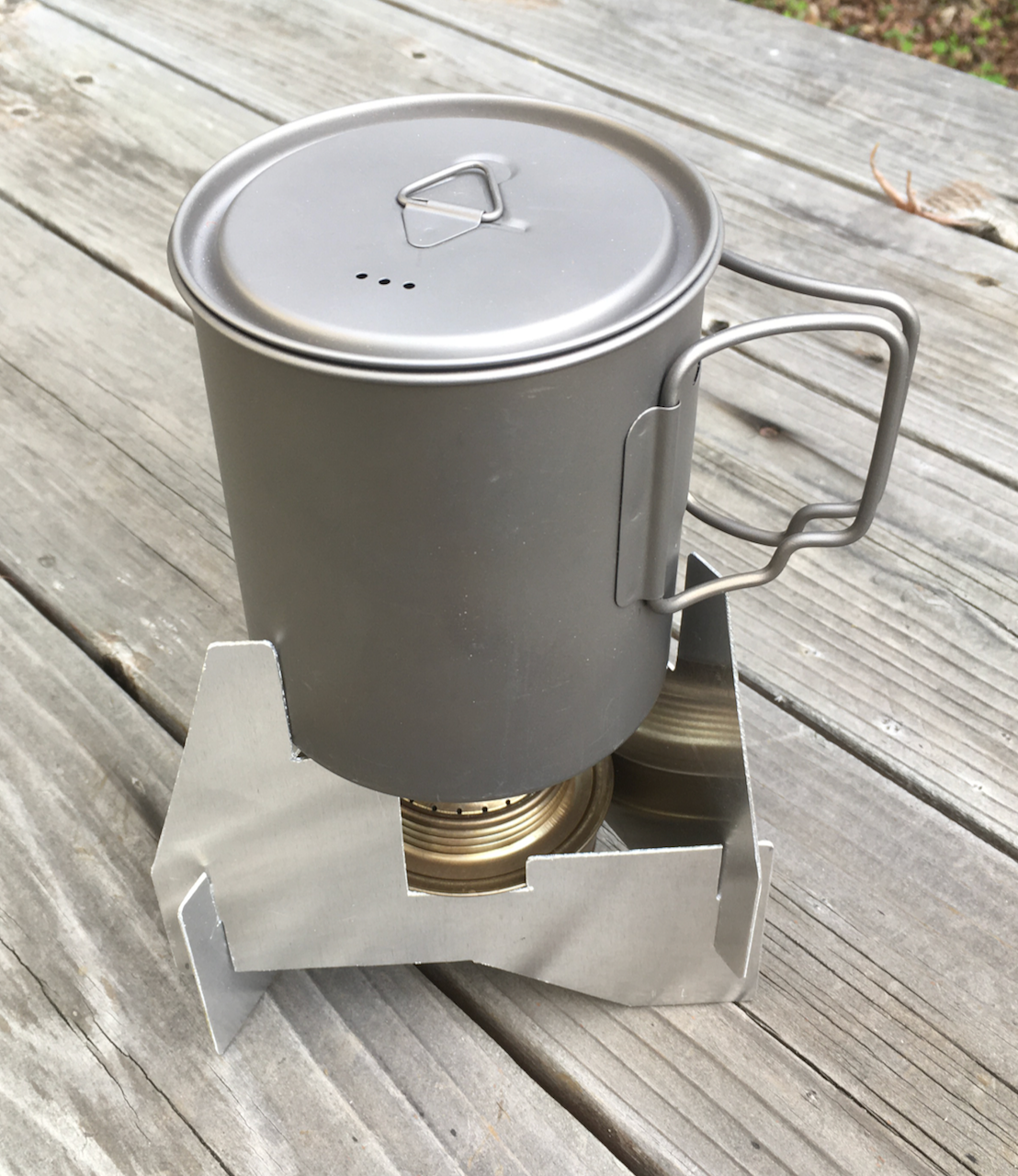