Proofreading a stoic: Seneca's On the Tranquility of the Mind

On the Tranquility of the Mind by Lucius Annaeus Seneca

I read this dialogue in a modern translation, and I found it calming and inspiring. Here is the book in which I found this work: 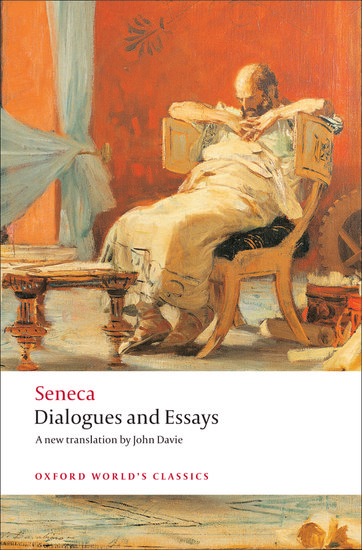 I think it's a good idea to support living writers with the skills to render ancient texts into readable modern prose. I recommend paying money for this book, Seneca Dialogues and Essays, a new translation by John Davie, published in 2007.

I thought this one particular essay, On the Tranquility of the Mind, was so good, however, that I wanted to see if there was a copyright-free version that I could pass around and publicize. (Maybe if people get a taste, they'll want more and buy the book to get a 21st century translation.) I looked at the Gutenberg Project (http://gutenberg.org), and while they have a few works by Seneca, they didn't have this one.

The archive.org website has a collection of scanned, copyright-free books (with raw OCR text for each page), including Minor Dialogues Together with the Dialogue On Clemency, translation by Aubrey Stewart, published in 1889. It contains the essay of interest.

The OCR text is very raw: there are numerous typos, and any hand scribbles on the page are converted to garbage. Footnotes, page numbers, and the chapter heading appearing at the top of each page are all included in-line with the regular text. Each page is in a separate file.

The Gutenberg Project is a volunteer effort, so I signed up to provide a cleaned-up, proofread, and formatted version of this 1889 edition to include in their collection. I skipped ahead in the book, and began working first with this dialogue that I was so taken with. Stewart rendered it as, Of Peace of Mind, so I have kept his version of the title. The text uses 19th century British spelling and punctuation, which I have also kept. He seemed to use colons a lot where today we would probably opt for semicolons. I list at the end of this post some words that my (US) spell-checker complained about.

Here is Seneca's Of Peace of Mind in a few different formats. Learn and enjoy.

In keeping with the spirit of thing, these files are free to download and use for any purpose, although I'd probably be peeved if someone else posted them and claimed that they had done the proofreading work.

Update: I finished preparing the full book, Minor Dialogues, Together With the Dialogue on Clemency by Lucius Annaeus Seneca, and it is now available on gutenberg.org:
https://www.gutenberg.org/ebooks/64576

I decided it would be tiring to do the proofreading by going back and forth between a full page image from the book to a full page of OCR text. I wanted a tool that would put each image line and text line next to each other. I'm a programmer, so I wrote one.

I also quickly abandoned any goal of making a general-purpose tool that could be used on any proofreading project by anyone. That would probably have increased the development time by a factor of 20 or more. For now, this would be a one-time, solo-user, single-project effort.

Here's how the completed tool works:

The main window first opens up to show a full-page image from the book. This is called the 'merged' view. (The view that will show image and editable text next to each other is called the 'split' view.) 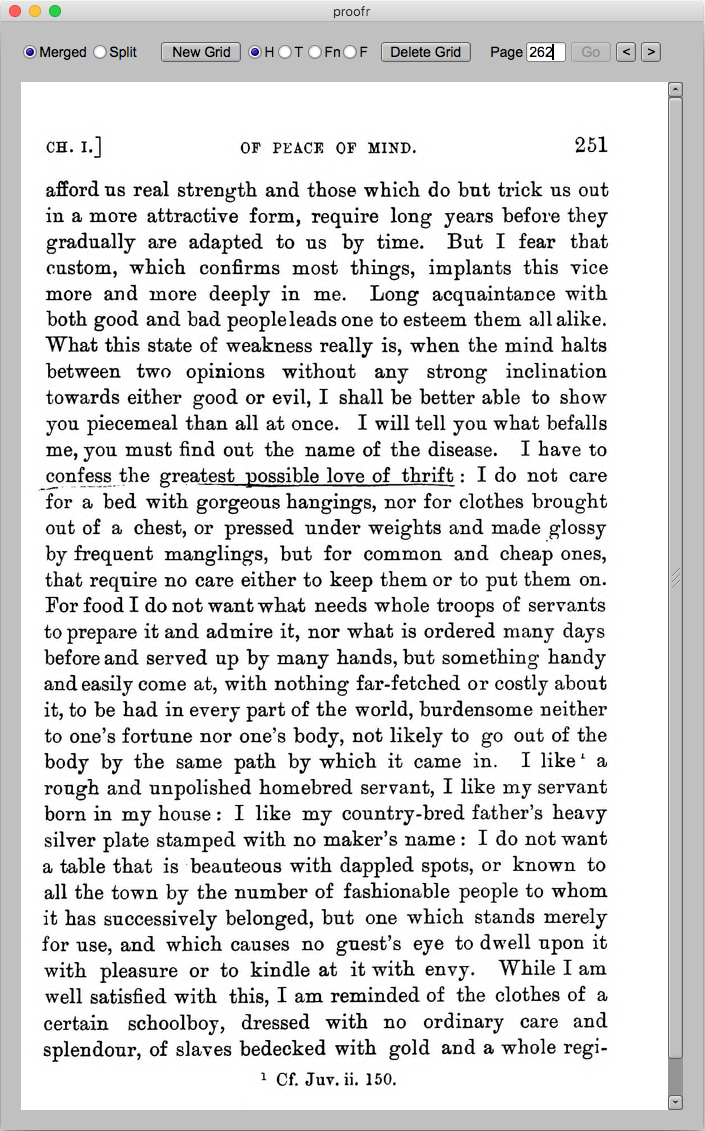 I then mark where the lines are located by creating a set of grids. Here I've clicked the New Grid button to create a grid to indicate a header line on the page.

I drag the grid into position, and adjust it to be one line long.

I click the New Grid button two more times, and adjust the grids so they delineate the main text rows, and the footnote rows. 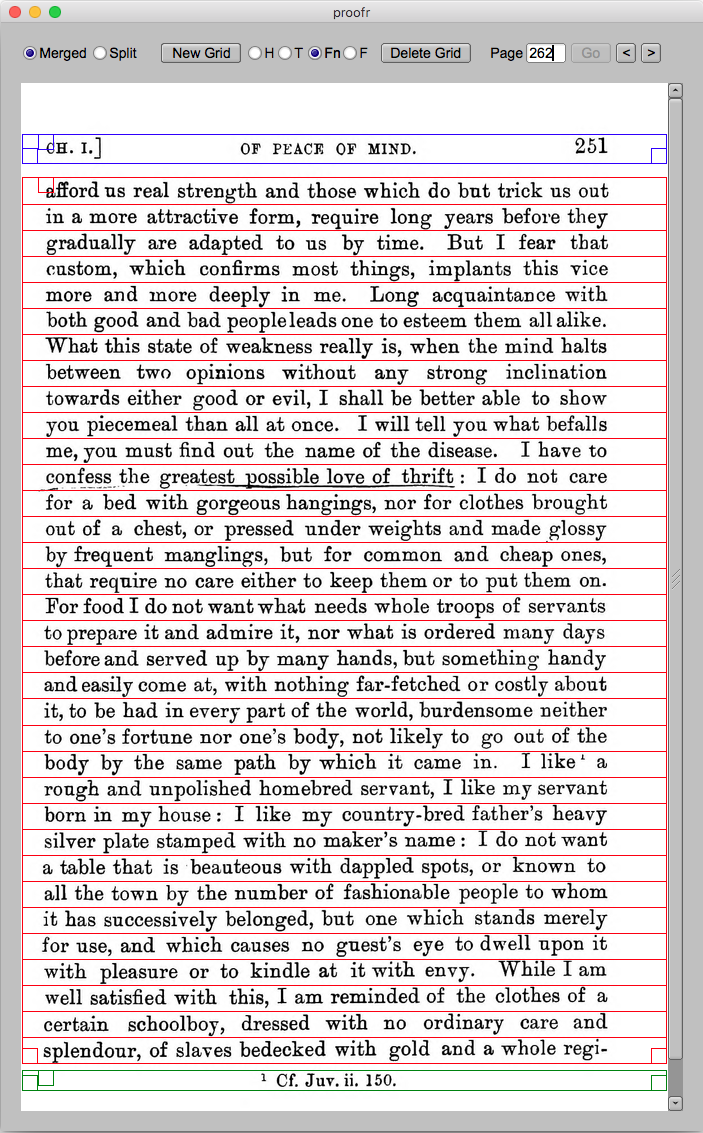 The controls at the top are for switching between merged and split views, creating grids of four types (header, main text, footnotes, footer), and switch to different pages images (either by going to a specific page number, go by going to the previous or next page).

The split view allows for editing each ine of text. The editable text is shown in blue, to make it easier to distinguish from the text in the image. 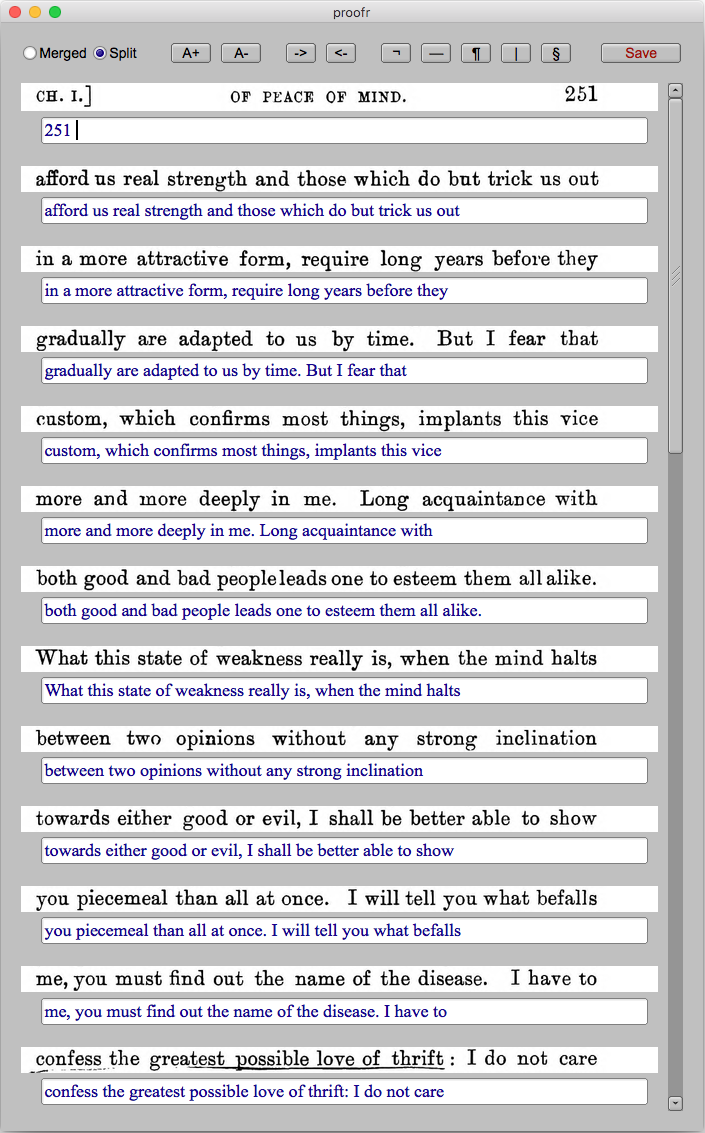 In the split view, the controls at the top left are for switching between merged and split views (as before).

The next two controls (A+ and A-) are for changing the size of the editable text. The two arrow controls after that are for scooting the editable text boxes to the left or right. I found it easier to proofread if the image and editable text were the same size and horizontally aligned.

The next five buttons insert control characters that affect formatting. These are: 1) a hyphen at the end of line that indicates a word break, 2) an em dash, 3) the beginning of a paragraph, 4) a line break, and 5) the end of section. (Footnotes can be collected and output as a group at the end of chapter.)

Menu commands (not shown) output the formatted text of the entire book as plain text or as html.

It all seemed to work OK. The proofreading went pretty quickly and painlessly.


Questions are welcome. To contact the author, send email.