The Patterning Frame from Ursula Le Guin's City of Illusions

Patterning Frame: "a fortune-teller, a computer, an implement of mystical discipline, a toy."

So I made one.


The patterning frame is an artifact presented in Ursula K. Le Guin's 1967 science fiction novel, City of Illusions. The story takes place in the far future of Earth, long after colonization of and travel to distant planets has taken place, and almost all of the associated advanced technology has been lost. Humans live in largely isolated communities, with a mostly primitive life-style except for a few high-tech tools which have remained working over the intervening centuries. The tale follows the journey of Falk, the first visitor to Earth in over a millenium, who was attacked by enemies upon arrival, and had his memories erased by them.

The patterning frame first appears as a hand-held object used by an older woman in a isolated small household in the eastern forests of North America. This community is where Falk (the "stranger") is initially rescued and taught to speak again:

Parth followed her blind cousin Kretyan up the stairs to the shady, breezy balcony where the stranger slept. Zove and his sister Karell, called Buckeye, were waiting there. Both sat cross-legged and straight-backed, Buckeye playing with her patterning frame, Zove doing nothing at all: a brother and sister getting on in years, their broad, brown faces alert and very tranquil.

Later on, we learn more about what it is when Falk encounters a much larger version of a patterning frame:

The Prince of Kansas was black as his silhouette or his shadow, an old, jetblack man seven feet tall with a face like a swordblade. “To go home...” He had moved away a little to study the long table near Falk’s chair. All the top of the table, Falk now saw, was sunk several inches into a frame, and contained a network of gold and silver wires upon which beads were strung, so pierced that they could slip from wire to wire and, at certain points, from level to level. There were hundreds of beads, from the size of a baby’s fist to the size of an apple seed, made of clay and rock and wood and metal and bone and plastic and glass and amethyst, agate, topaz, turquoise, opal, amber, beryl, crystal, garnet, emerald, diamond. It was a patterning-frame, such as Zove and Buckeye and others of the House possessed. Thought to have come originally from the great culture of Davenant, though it was now very ancient on Earth, the thing was a fortune-teller, a computer, an implement of mystical discipline, a toy. In Falk’s short second life he had not had time to learn much about patterning-frames. Buckeye had once remarked that it took forty or fifty years to get handy with one; and hers, handed down from old in her family, had been only ten inches square, with twenty or thirty beads...

We also see how this adept uses it, in the following vivid description:

A crystal prism struck an iron sphere with a clear, tiny clink. Turquoise shot to the left and a double link of polished bone set with garnets looped off to the right and down, while a fire-opal blazed for a moment in the dead center of the frame. Black, lean, strong hands flashed over the wires, playing with the jewels of life and death. “So,” said the Prince, “you want to go home. But look! Can you read the frame? Vastness. Ebony and diamond and crystal, all the jewels of fire: and the Opal-stone among them, going on, going out. 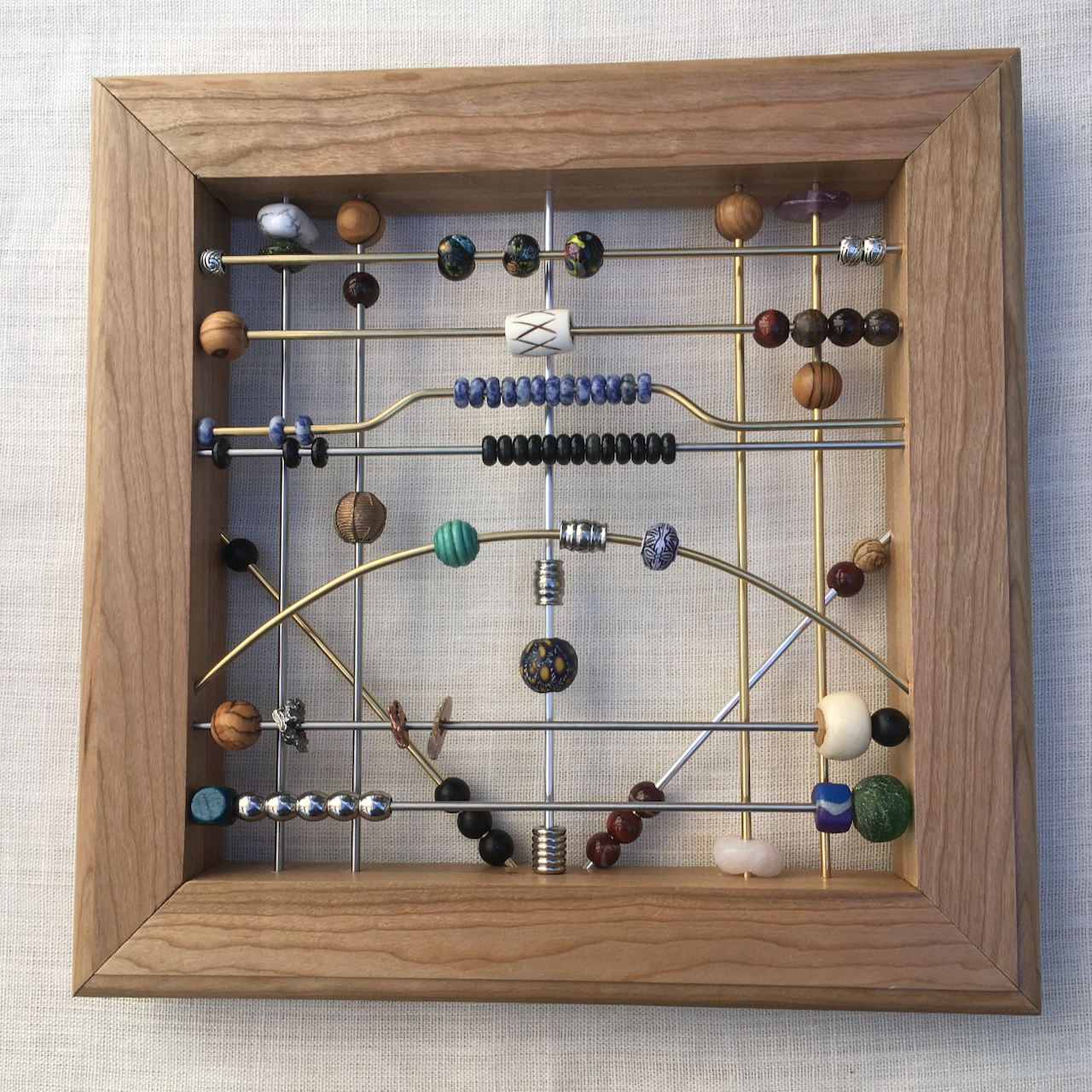 Inspired by the version belonging to the Prince of Kansas, I sought out a wide variety of beads. Most were store-bought or ordered online, a few were hand made (or at least hand-drilled). I managed to get ones made of "clay and rock and wood and metal and bone and plastic and glass and amethyst," among others. (The clay was actually polymer clay, which isn't really clay.) There's also a meteorite and a fossil.

I wanted a certain bit of symmetry in the design, but not too much. I felt an appropriate amount of unbalance would give it a dynamic feel, since it is, after all, a tool that's meant to be manipulative and to display constant change and possibility.

A design goal was to have the patterning frame's beads be of a variety and arrangement such that when a person sees it their fingertips start itching to touch the beads and move them around.

In a nod to the supposed "computing" aspect of patterning frames, there are a few echos of the pattern of abacus beads. Also, there are are 16 onyx beads and 16 blue sodalite beads that can be slid around to signify any 16-bit binary number. I don't know if Le Guin's Hainish civilizations had any preference for hexadecimal, but I do, and a patterning frame is, after all, a personal device.

When I switch from science-fiction-fan mode to Ph.D.-physicist mode, I confess to a certain lack of confidence in the patterning frame as a fortune-telling tool. I settled for a bit of metaphor in the design, by placing three rods emanating from the bottom center of the frame, the left and right angled ones symbolizing past and future, and the longer central one symbolizing the present. That concludes the mysticism part of the exercise. For the rest of the project, I just wanted to make something that looked cool, and had a back-story that captivated me since I was young.

According to the description of the patterning frame in scripture, “it took forty or fifty years to get handy with one.” If I'm still around at age 110, I'll post an update.


In the spirit of open source, I now disclose my suppliers and methods.

The copper nugget and the meteorite were metal, so I used an ordinary drill bit with cutting oil to make holes in them. To drill holes in the minerals (amethyst, howlite, rose quartz) and the fossil (a small ammonite), I used diamond-coated 4mm hole saws, which were 9 bucks for 15 of them from Amazon, which sounds good, except it took two or three of them for each hole. The two bone beads had holes that were slightly too small, so I put a drill bit in a hand-held pin vise, and carefully reamed them out. I put some metal feet on the bottom of the frame. Cordless drill, router table, wire-bending jig, clamps, and carpenters' glue completed the armamentarium.