My password manager runs on my macOS desktop computer. I wanted to print a plain text copy of my password list for storing in a safe deposit box.

I wanted to do this without having any files that could contain unencrypted sensitive information ever being written to disk by the password manager or the print spooler, or travelling over any network.

This is the method I used:

Use of this unofficial sandboxing technique is described in more detail in the previous post, Sandboxing a third-party macOS app to restrict writing to one folder.

In the following, MyPasswordProgram is a stand-in for the name of the actual password manager in use.

My password manager offered a few options for the format of the exported file. Experimentation revealed that some options used the technique of writing a temporary file (on the hard drive!) first. Fortunately, the plain-text option wrote directly (and only) to the selected output location.

Get AESCrypt command-line tool for macOS

Although the aescrypt.org website has macOS binaries available for download here, I opted to get the source and build it myself.

(I used aescrypt_mac_v314_1_source.tgz, although there might be a newer version by the time you read this.)

Using sudo make install after this did not work for me (on macOS High Sierra 10.13), so I installed it by hand.

Since the theme is paranoia and because the AESCrypt folks make hash values available, I did verify the source code package before I built it.

One of the authors says, however, in response to a request for a way to verify the files:

I confess I did not go so far as to verify the GnuGP signature of the file of hashes itself. I didn't read the source code, either.

This asks for a password, encrypts the clear-text file from the RAM disk, and writes the encrypted result to a work directory (on the hard drive).

Unmount the RAM disk after this is done. (In a Finder window that lists all your devices in the sidebar, this can be accomplished by clicking the Eject ⏏ icon to the right of the RAM disk's name.)

The Raspberry Pi 3 needs an operation to allow for booting from a USB flash drive, in addition to usual ability to boot from an SD card. That operation is documented in a previous post, Solution for a Broken Raspberry Pi SD Card Reader.

The next step calls for a flash drive with a physical write-lock switch. I got this 8GB one from Kanguru: 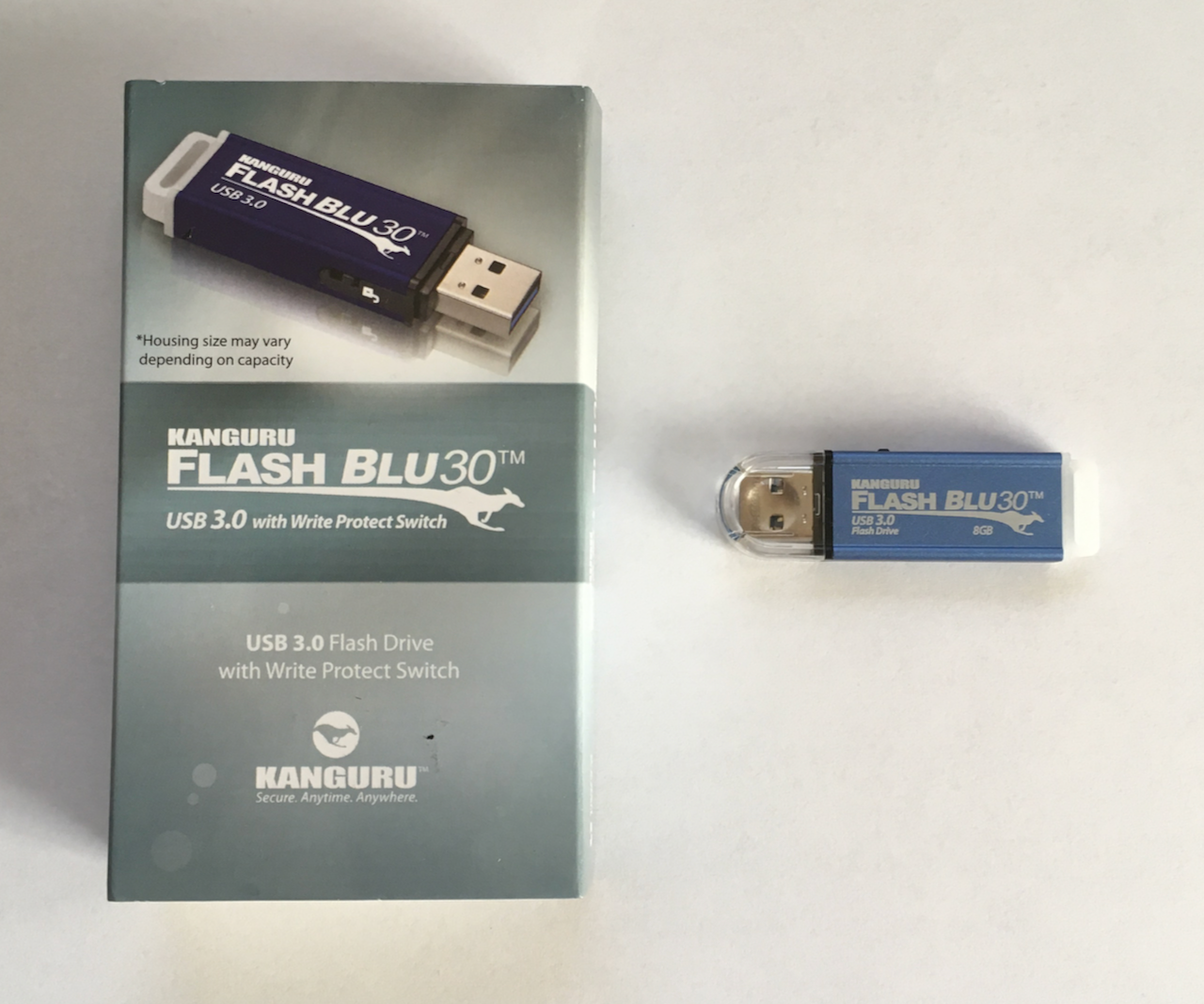 This brings up the question, "[StackExchange] How reliable is a write protection switch on a USB flash drive?"

The consensus is that it's pretty good.

Note, however, the following gotcha from Kanguru's support site regarding another one of their flash drives with a write-protect switch:

The SS3's write-protection switch must be set in either the locked or unlocked position BEFORE connecting it to your computer. Once the device is connected to a computer, it will remain in whichever state it is set in regardless of whether you change the switch position. In order to change the device's state from read/write to read-only or vice versa, you would need to safely remove the SS3 from the computer, set the write-protect switch to the desired position, and then reconnect it to the computer.

The above is consistent with comments on the StackExchange link.

Install Raspberry Pi OS (formerly known as Raspbian) on the flash drive, and prepare it for headless operation from first boot:

Configure the new system for read-only operation. This follows the method given in Make your Raspberry Pi file system read-only (Raspbian Buster), which explains the instructions which follow in summary only:

Encrypted file to the flash drive

In one macOS Terminal window, ssh to the Raspberry Pi and set it to read-write mode.

In another macOS Terminal window, use sftp to transfer the encrypted text file.

Make sure clock is up-to-date

Search for the line Listen localhost:631 and change nearby lines to look like this:

Search for the lines beginning with Restrict access to the server... and change to look like this:

Plug a simple USB printer (i.e., not multi-function, and having no non-volatile memory) into the Raspberry Pi, and turn on the printer.

From another computer on the local network, log in to the print web server by visiting port 631 on the Raspberry Pi, e.g., https://172.16.1.21:631. (Ignore complaints about an invalid https certificate.) Go to the Printers tab.

The details of the next step, setting up the printer, depend on the printer in use. Mine is an elderly Samsung Xpress SL-M2625D Laser Printer. The model was not listed among the options for Samsung printers. The driver I downloaded from Samsung didn't work. In the end, I had best luck with the Samsung ML-2550 - CUPS+Gutenprint v5.3.1 (grayscale, 2-sided printing) driver.

My printer can print double-sided pages this way:

or a range this way:

The basic lp command prints a plain-text file in a monospaced font. For my printer, this comes out in a size that yields 80 characters per line and 64 lines per page.

I would have liked to be able to use command-line tools such as groff to format the output, but that would have required the ability to send a postscript file to the printer. With the driver difficulties I encountered, I was unable to accomplish that without spending more debugging time.

In order to have a more compact and elegant printout, I wanted to have two columns per page, and to avoid having a column or page break in the middle of an item group.

I wrote a quick program for this (https://github.com/7402/columnizer). This is rough, uncommented code - just as an example of what can be done, rather than something to copied and reused. If anyone in the universe wants it polished, send email.

To build on the Raspberry Pi, just transfer the file columnizer.cpp and then do:

Plug in printer to USB port on Raspberry Pi and power on. Verify printer name. (Make sure printing does not get sent to a networked printer!)

And print (double-sided, if available):

Then shut down the Raspberry Pi.